After a weekend of incredible conditions in Sydney and down the coast that were blessed by NE winds, blue skies and +30c temps we’ve had the mother of all Southerlies come through Sydney and smash us!! 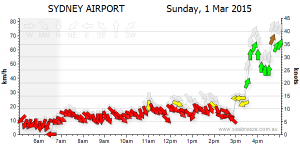 I managed to arrive home from down south just as the big dark storm clouds rolled in and the wind died from being a ~12knot NE to what appears to be a 45knot+ Southerly with lightning and rain!

I did see 2 kites ready on the beach down at longy, I hope they were small and I’m taking a punt that one of them was Barber Shop Ben as I stole one of his pictures from Facebook :).

Pretty insane stuff, hope everyone stayed safe and didn’t do anything stupid. Below are a few shots I snapped when the storm first hit in Dee Why.

We had a corker of a lightning show last night in Sydney and I had a front row seat on the Manly ferry at about 10pm to watch it over the harbour. Wondered if the phone would catch it on video and nailed this perfect vid of a strike over the Eastern Suburbs. Hope no hipsters got zapped on this one!