Gallery of Hans strapless kitesurfing at Dee Why

Hans sent through these great go-pro images from a strapless kitesurfing session he managed to jag the other day. This was Sunday’s great session I believe where we were blessed my sunshine and cranking winds. Even I managed to get down for my first kite in a while and got out on the 7m! Fab stuff Hans, keep the pictures rolling in.

If you haven’t yet tried strapless END_OF_DOCUMENT_TOKEN_TO_BE_REPLACED

OK, The craziness bar has just been raised. Check out these pics of Marty ‘Snowman’ Brown trying out a few skill crossovers on water! I’m seriously impressed with this effort!! It looks like Marty has found himself some some water skis and just got on with the job at hand. Good work Marty..

It’s all happening in the MidWest this summer. Sunny, hot and of course — windy.

We had a great downwinder on Sunday to introduce Mr T to  the neighborhood. All indications are that he got a good first impression.

Haven’t heard from the boys since about 1:30 this afternoon when the GPS tracker checked in just south of the Hamlin Pools turnoff on NW Coastal Highway.

Given the weather conditions (30+knot Sou’easters and 4m swell) the plan was to drive to Steep Point and assess whether it was feasible to safely restart the journey from there, so I suspect they’ll be camped there tonight and check in tomorrow morning.

A few of Kat’s photos from yesterday as Ian was pushing off from Drummond Cove: 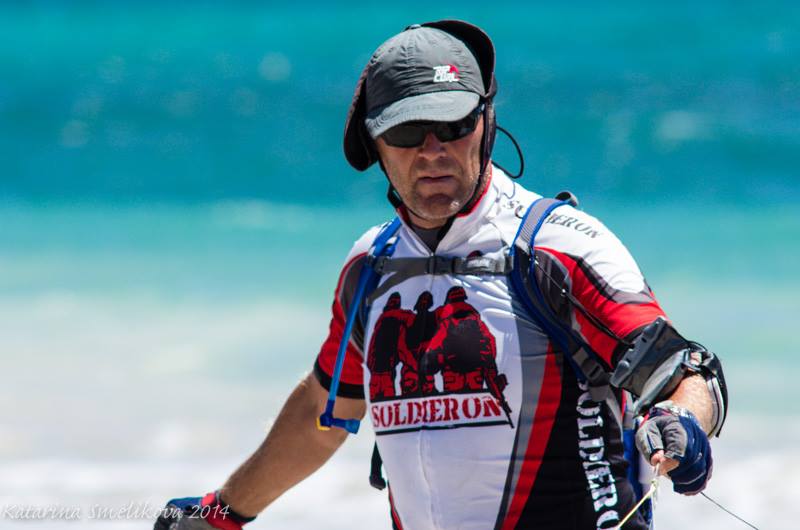 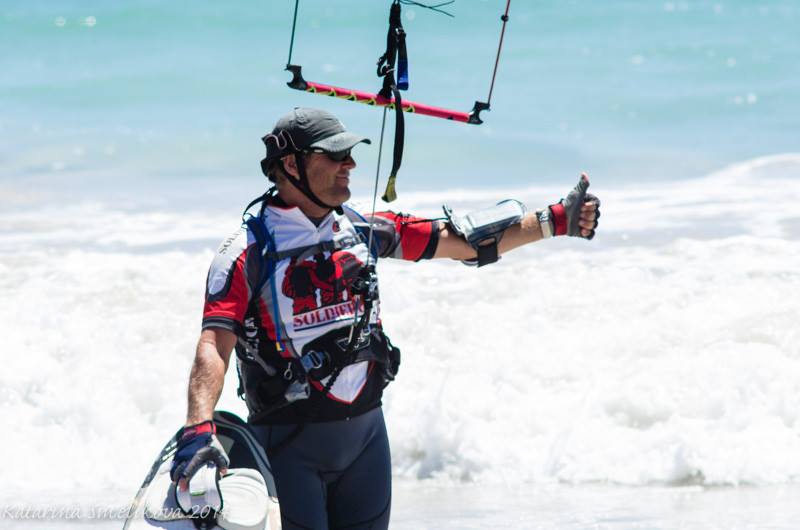 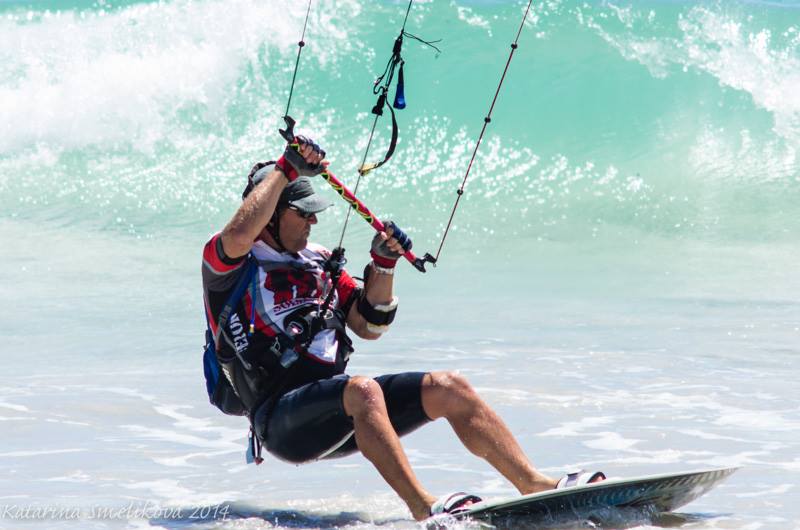 GERO! He’s landed! Tried to shadow him from Sunset to Drummonds but not even a chance on my 11m!. Gave up after about 500m and drove the rest of the way. Ian even manged to beat the car to Drummond Cove on the 17m foil! Beers and BBQ done, Ian’s already in the sack catching ZZZzzzzs in preparation for another go tomorrow. 440km in 4 days! Sensational mission so far! Great to see you in such great spirits and great shape! 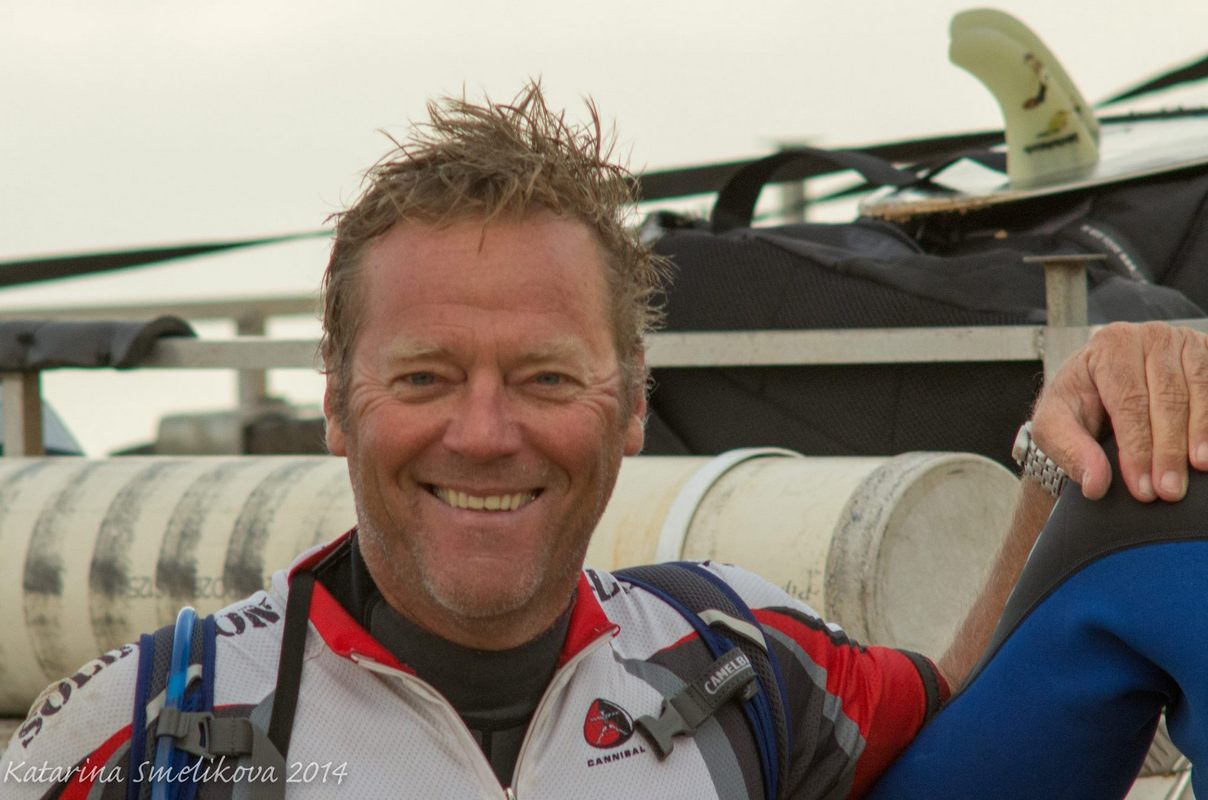 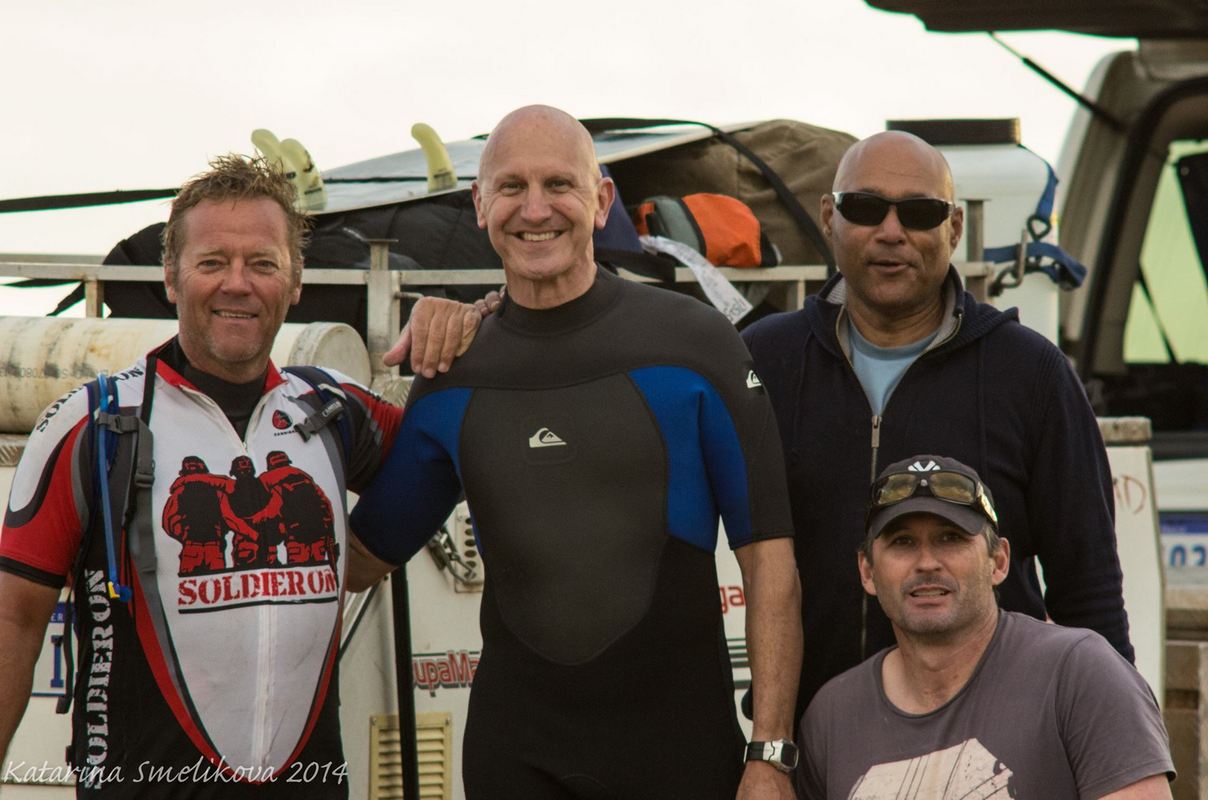 No more waiting folks–It’s ON. 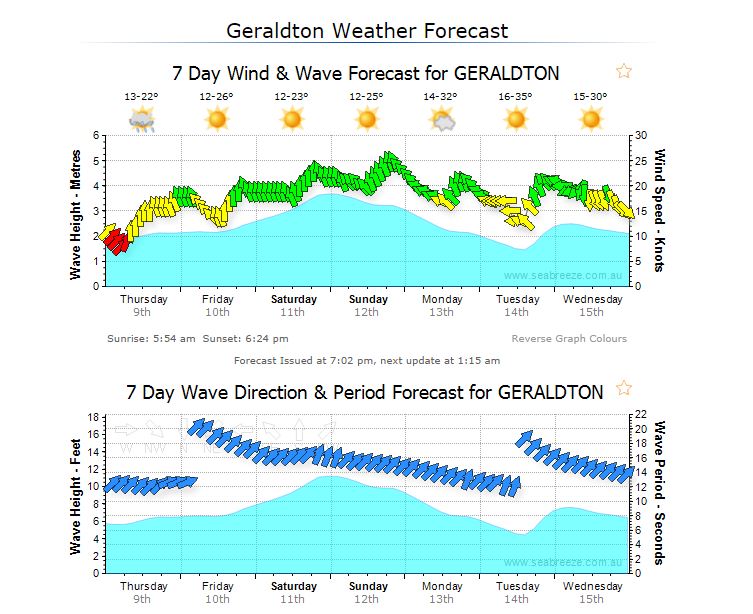 So, on Sunday I get a call from Andrew Forsyth saying something along the following lines ‘offshore, big waves, sunny. Bring the Drone!’

Now I’m always up for some fun and getting some cool shots so I hooked up with the boys out at White Rock and got some great drone footage! They guys got SMASHED! kudos to all of those guys for taking some on the head. One thing the drone does is make people show off!

Here are some stills from the video, we’re editing up some shots together and we’ll post em as soon as we see it.

My personal favourites are getting a little too close to one drop in! He looked concerned.. And the 3 SUP carnage in one closeout set. Check out how high that board got! haha..

This is great! I was sent a text today with this picture attached. Awesome!

It also reminds me I’d not got the shop sorted. I’ll get it retested and up so you can all get yours. 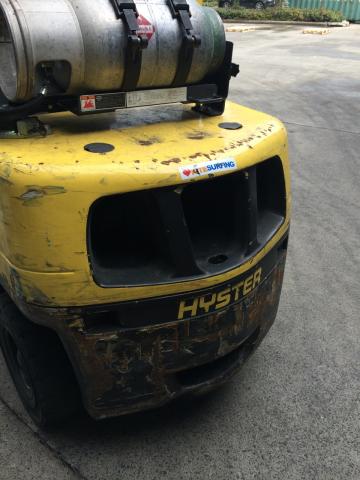 Have a good week.

Hey all, it’s another amazing day in Sydney with sunshine and at 8am a steady nor-wester blowing. This is kind of how yesterday looked when I made the last post.

We were down at kurnell yesterday and did a little trip over to Towra, it was really nice over there but it didn’t last for too long after the wind started to gusty up to the point I got ripped off the water on a 9. Its been a long time since I’ve been totally spanked by a kite. I took this as a sign that it was probably time to switch to a smaller kite so we headed back knowing that the forecast was for a big westerly switch.

When back at the carpark I was about to whip the 7 out and took a look up at the sky, a BIG rolling fast moving bank of cloud heading in from the west. Hmm maybe its coming. Theae clouds when overhead looked like nothing I’d seen in a while, and as a rule if clouds look funky then something funky is going on up there. Big troughs of flat bottomed cloud banks that I really must look up. 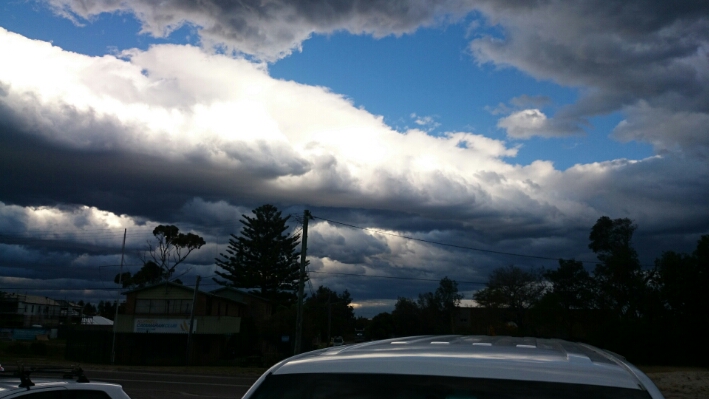 Taking my inner advice that things were probably about to all get ‘messy’ our little group decided that watching the impending carnage with a few beers could be better. I actually launched someone on a bws 8 and pointed him at the clouds and said you better watch that fella, he actually decided to take our advice and drop his kite again. I’m sure he’s happy he did  So off we pop to the bottle shop for 5 mins, on our return we notice a change in things, the trees are sideways, cats are airborne and the water! Fark! 45 knot squalls do something to water, it makes it separate from itself and turn into walls of spray. After a few holy shit moments we spot a kite loose about 200 meters out blowing downwind towards the oil pipe pier, we make a quick call to the cops to say there is a kite free, we find the owner on the beach and let the cops know not to panic as others will prob call in. This didn’t stop the boat, westpac chopper and 2 cop cars turning up tho! 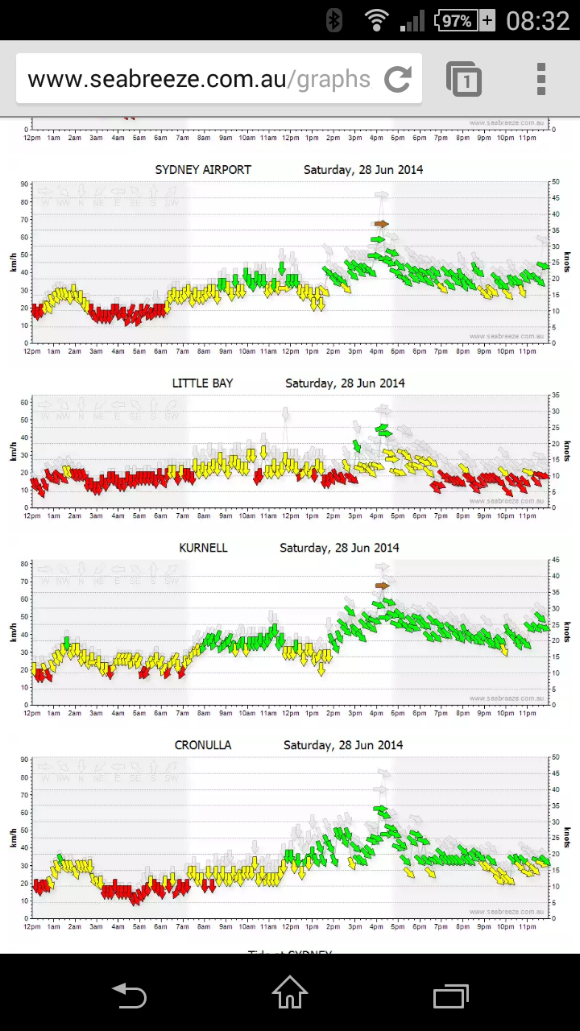 That’s the graphs from yesterday. It was WILD! BUT it was forecast and it was visible that it was coming. This is why it pays to be prepared, know the skys, read and understand what’s going on. You don’t need to be a weatherman but question change. Why is that big bank of cloud coming? Why is it lined up different from the current wind direction? Why did it just get cold or warmer. I feel this is something missing from a lot of todays kiters who get out of an office chair and go kiting because its ‘extreme’ the main emphasis is on the kiting, not the wind. Sure http://www.seabreeze.com.au  helps and we have more tools at our disposal that ever before. Learn the weather and become a true sailor! It takes time, I’m fortunate enough to have the background but even I’m rusty. In the next few weeks I’ll find some good basic weather stuff and throw it up and talk about the common local Sydney things that catch out people.

Anyway, when things settled it turned into an incredible sunset. Here are some pics and one of me taking a piss. Thanks Jess Digs. I think? 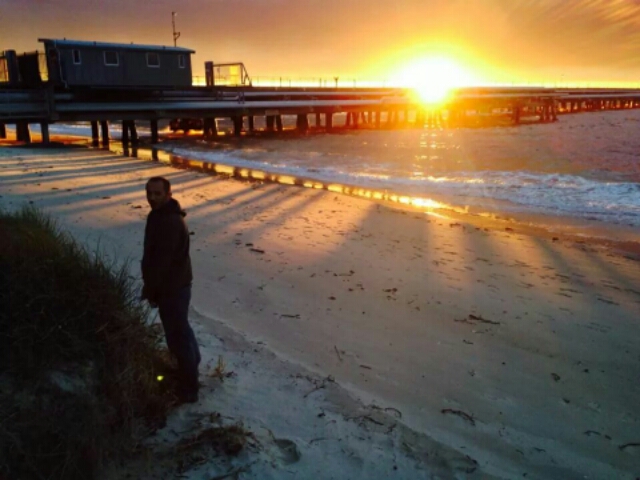 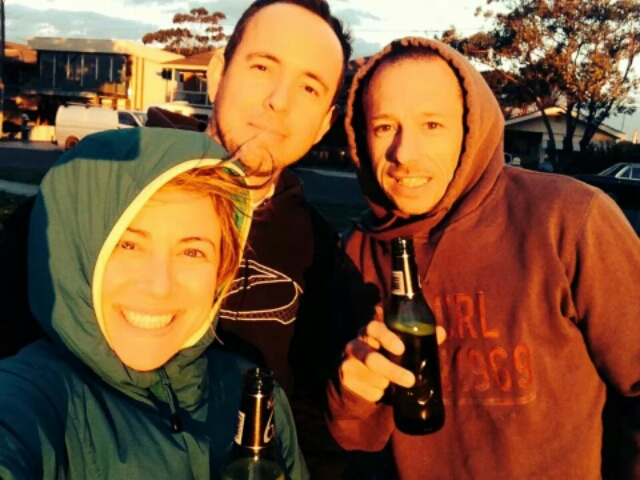 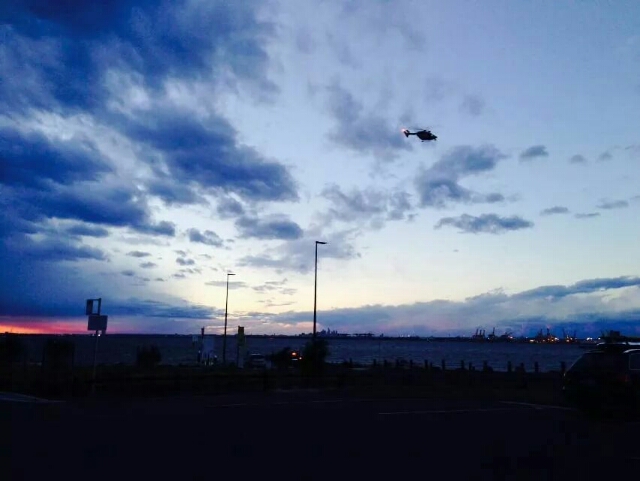 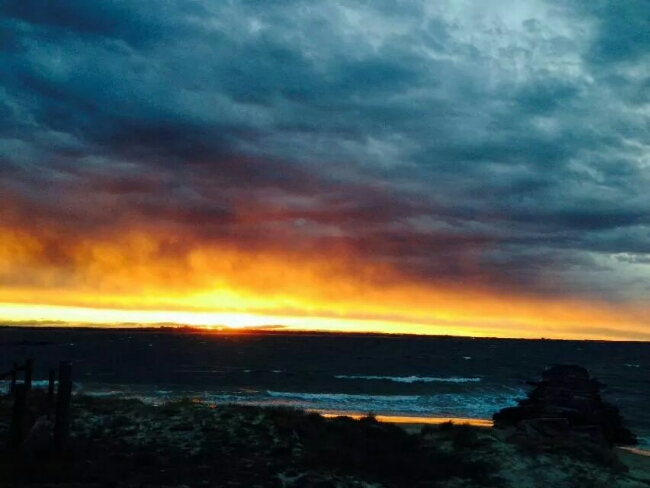 Quite a few people managed to get out tonight for a good session with a decent breeze for once! I managed to rock up at about 5.30pm and met up with Matty Ma and Bill briefly who’d been out for the afternoon and were packed up and heading off. Chris, Alex, Christoph, Dave, Tom and Sonia all showed up and a few others.

Most the usual suspects were there but it did seem a little quiet for a decent breeze, maybe the lack of good wind has driven everyone down south!

One of our resident photogs was on hand to snap a few pics of myself and Gravy Davey mucking about. I was trying to do dark slides today and this resulted in multiple face plants and a good beating!

Here is a real quick selection of some of Grant’s pics, sorry most of them are of me! Grant will fix up some of the better ones and post them up soon.